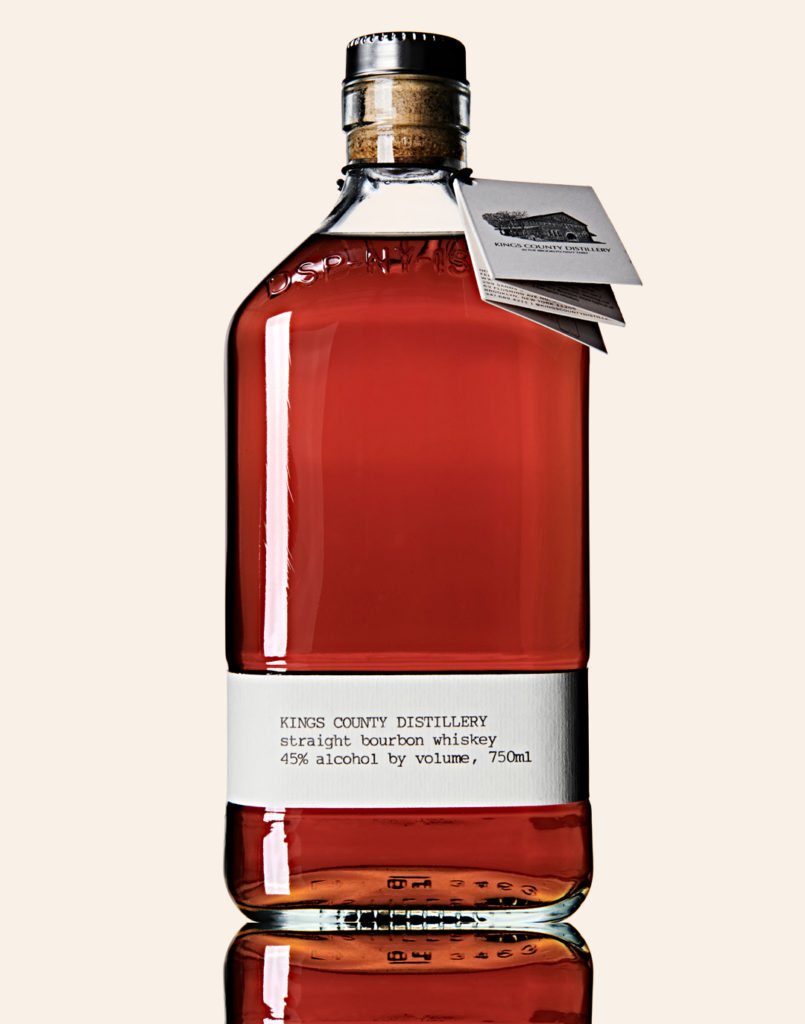 Kings County Distillery’s Straight Bourbon is made from New York State 80% organic corn and 20% English malted barley, is twice distilled in copper pot stills and then aged in new charred oak barrels. Rich in caramel, vanilla, and holiday spice, this bottle is cited frequently in lists of best non-Kentucky bourbons. Aged for at least two years, this is a precocious whiskey, surprisingly robust for its age. 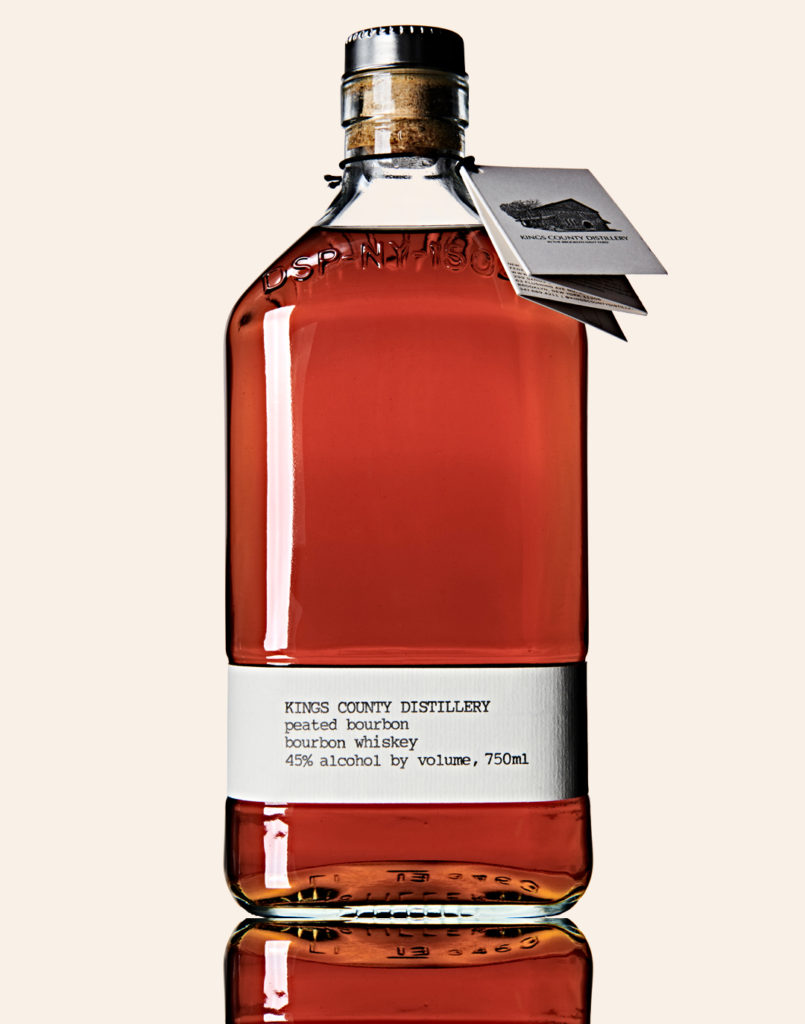 What is Peated Bourbon? It’s bourbon whiskey that conforms to the American requirements for bourbon but is made with malted barley that has been exposed to peat smoke, a practice more common in Scotch whiskies—the malt we use for the peated bourbon was even grown and kilned in Scotland. So it’s a hybrid whiskey of the two traditions, flavorful and robust from having aged in a new barrel, with an added light smoky finish reminiscent of single-malt. If scotch and bourbon had a baby, this is what it would taste like. As far as we can tell, ours was the world’s first ever peated bourbon and will appeal to the adventurous whiskey traveler who has tried everything.

“The dram is salt-forward from start to finish, interspersed with rich bursts of flavor. Hot rubber, pretzels, slightly bitter baker’s chocolate, warm leather, and hard candies define the palate…peat is not a primary element, but it is clear that this is an exceptionally complex spirit.”—Whiskey Wash (93) “Quite stunningly lovely.” (94=Superstar whiskies that all give us a reason to live) Jim Murray’s Whiskey Bible, 2017

Our Single Malt Whiskey is made almost entirely like a single malt scotch—except that instead of being made in Scotland, it’s made here in Brooklyn. Kings County Distillery’s single malt whiskey is open-fermented off the grain from malted barley (with a hint of peat) sourced from England and Scotland. The whiskey is twice distilled in traditional Scottish pot stills, then aged in our own used bourbon barrels anywhere from 1.5 to 4 years. With a higher post-cask strength than our American-style offerings, this whiskey warranted a higher bottling strength—47%—and so it is more potent than its palate would suggest. Dry and sophisticated, it is an elegant whiskey with notes of honey, hay, burnt orange peel, and peat. It is a perfect addition to your shelves. 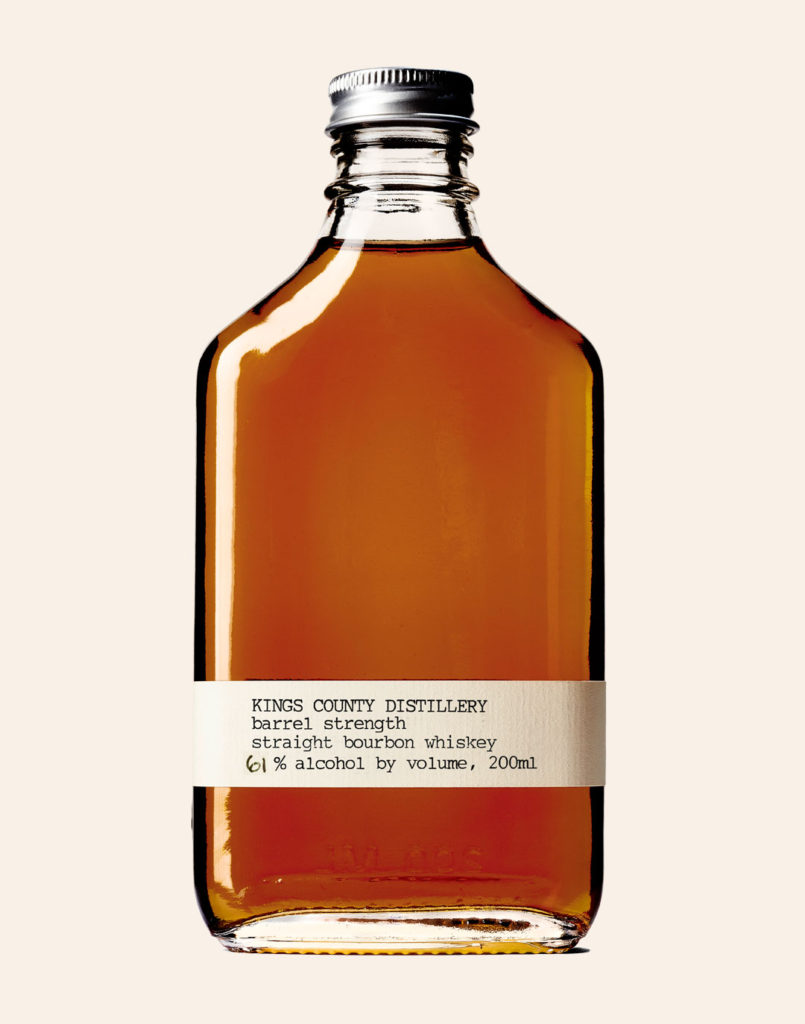 Clocking in at 116-128 proof depending on the batch, Kings County Barrel-Strength Bourbon is pulled from older barrels than our flagship bourbon, aged any where from two to almost five+ years.  Many enthusiasts prefer whskey straight from the barrel, which allows the drinker to add ice or water to taste. Smooth and bold, this is our most flavorful and intense whiskey. Wine and Spirits magazine awarded it Best Bourbon of 2015.

“Of all the craft distillers in the nation, none makes bourbon more delicious than Kings County”— Wine and Spirits Magazine 2015 (Spirit of the Year). 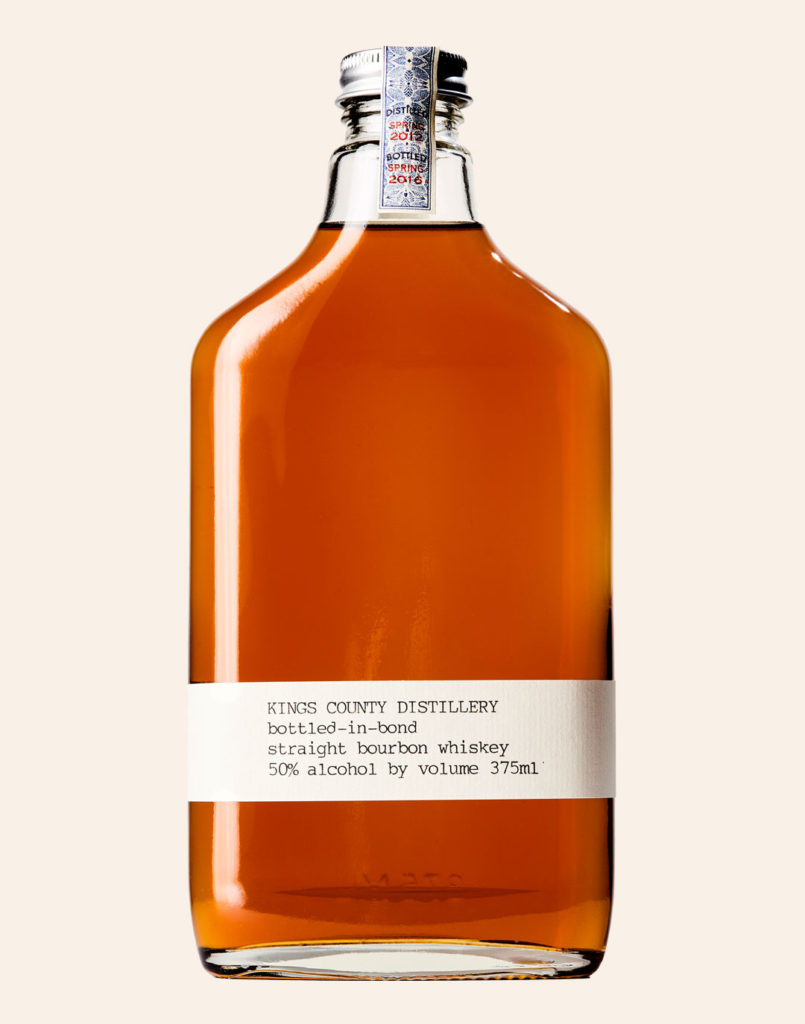 Kings County is among the very first craft distillers to release a style of whiskey that can be considered the highest class of American Whiskey.  Bottled-in-Bond is a designation that refers to American whiskeys (and some brandies) that are distilled, aged, and bottled entirely at one distillery, from barrels filled in one season, by one distiller. Furthermore, the whiskey must be four years old and bottled at precisely 100 proof. In the old days, this was a way to protect the consumer from brands that were merely bottling up whiskey from other distilleries and blending or adulterating that whiskey. In an era when consumers still sometimes have a hard time knowing exactly where their whiskeys actually come from, bottled-in-bond best expresses the advantages we enjoy by making all our whiskey in-house from grain to bottle. Highly allocated but available everywhere. 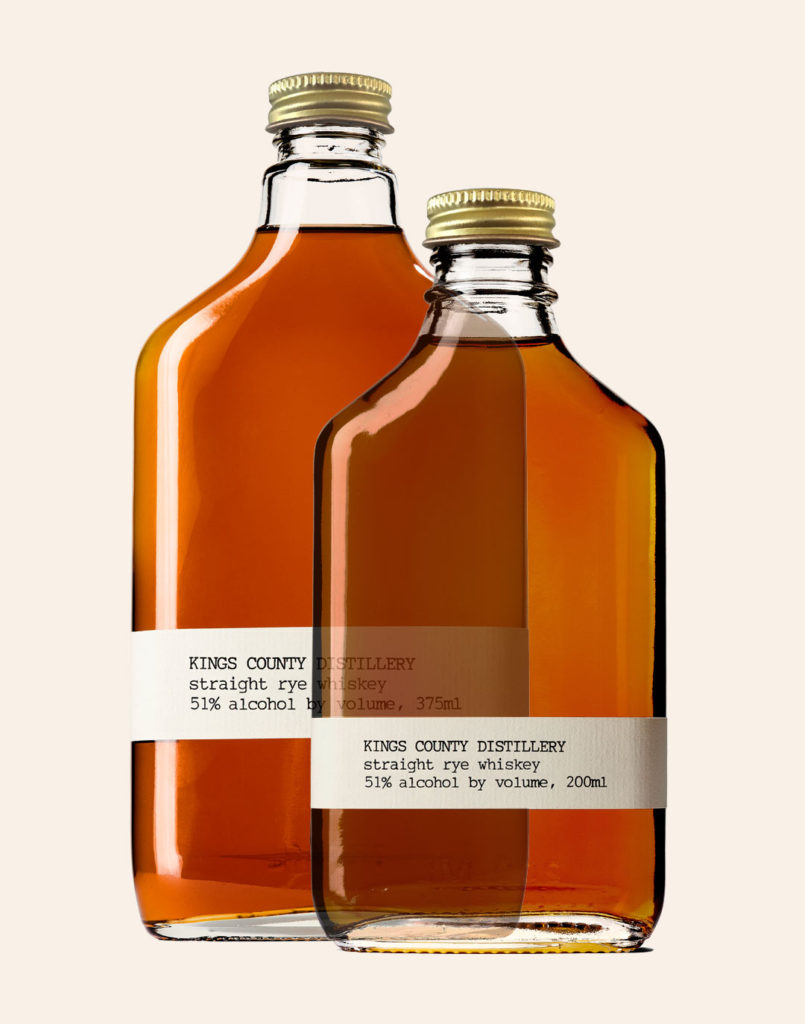 Part of a broader project with other New York distillers, Kings County Empire Rye whiskey is made from 80% New York grown Danko rye and 20% english barley malt and is aged 2 years in charred oak barrels. With notes of cinnamon, nutmeg, maple, mint, and cut grass with a finish of warm bread and holiday spice, this is a more flavorful rye than some of its commercial peers. Released at 102 proof, this is a potent entry into a much-loved category. 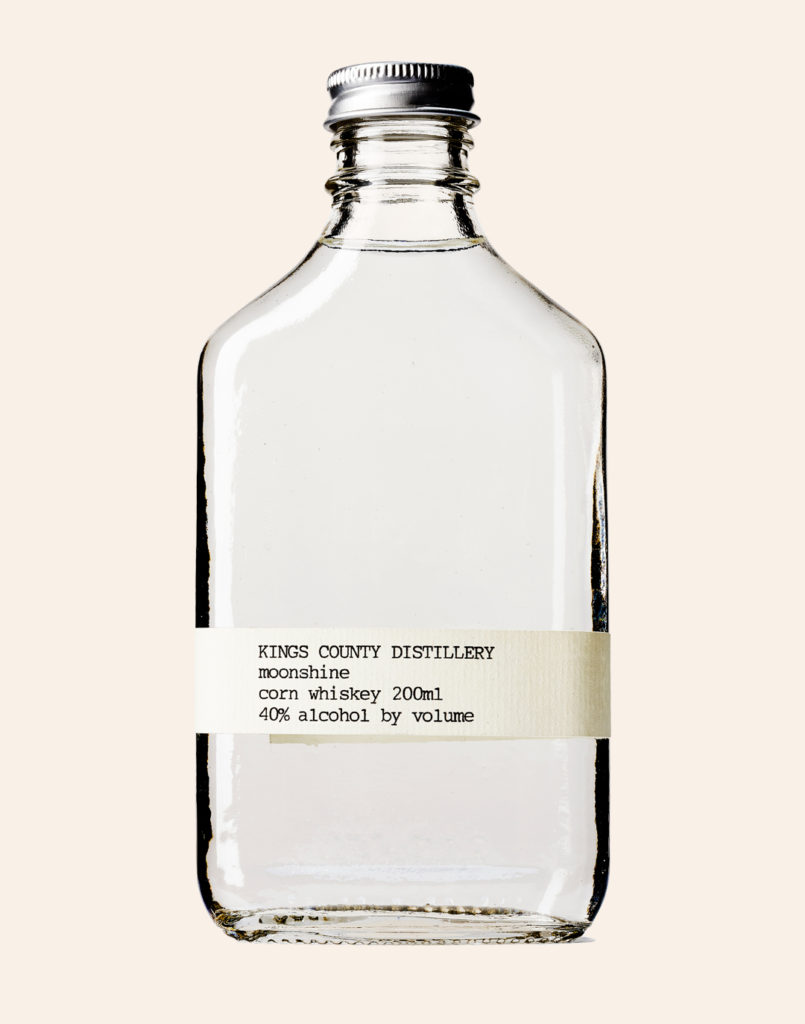 Before “white whiskey,” there was moonshine, otherwise known as whiskey before it is aged in a barrel—though the word can also mean any illegally-made spirit. Ours is a corn whiskey made from 80% New York State organic corn and 20% malted barley. It is double distilled and reduced to a smooth, drinkable 80 proof. Bright with a sweet slap of corn, this is our take on a classic American whiskey.

“Absolutely spot on corn whiskey; sweet, clean, berry-fruit, very well made and does exactly what it says on the tin (92=brilliant).” – Jim Murray’s Whiskey Bible 2013 & rescored (no change) 2017 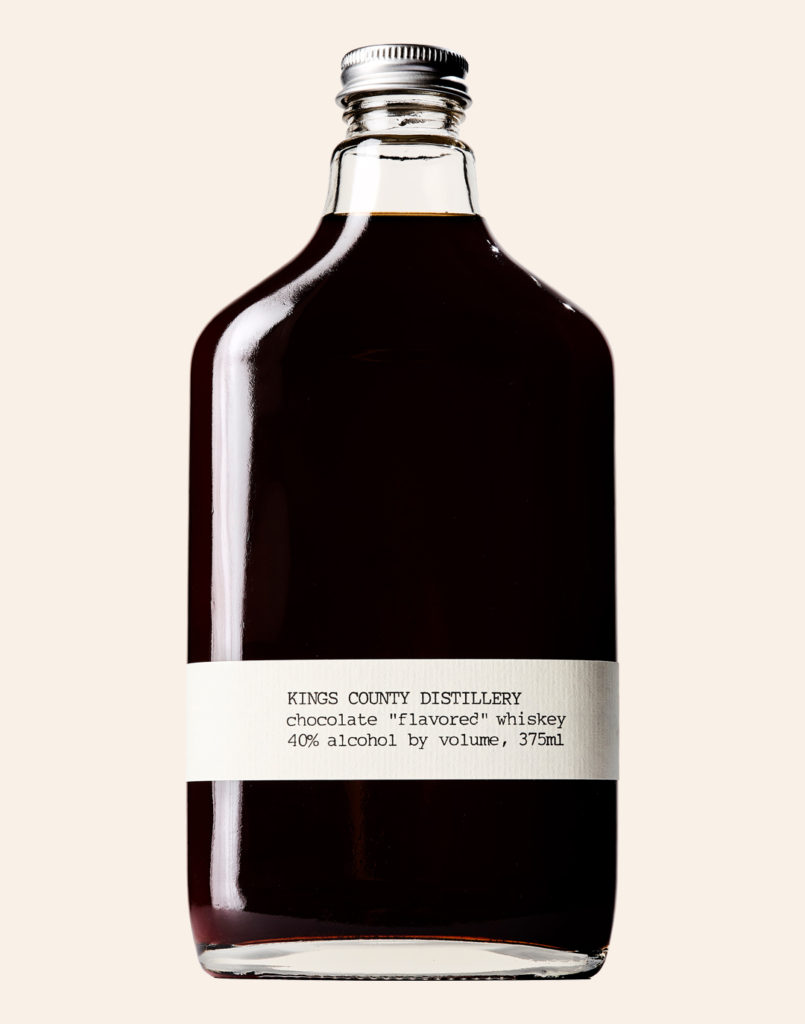 Kings County’s Chocolate Whiskey infuses our Moonshine with ground cacao bean husks from Raaka Chocolate, whose factory is in Red Hook.  Bitter and surprising, this rich whiskey tastes like dark chocolate and works great in cocktails or on its own as an after-dinner drink.

“Six Flavored Whiskeys to Try” Whiskey Advocate 2017.  “Exceptional… exquisite… I didn’t know I needed a chocolate whiskey until I sampled some during a tour.” — Cocktails & Cologne. “Rich, with a nice mix of sweet and savory flavors.” — Uncrate 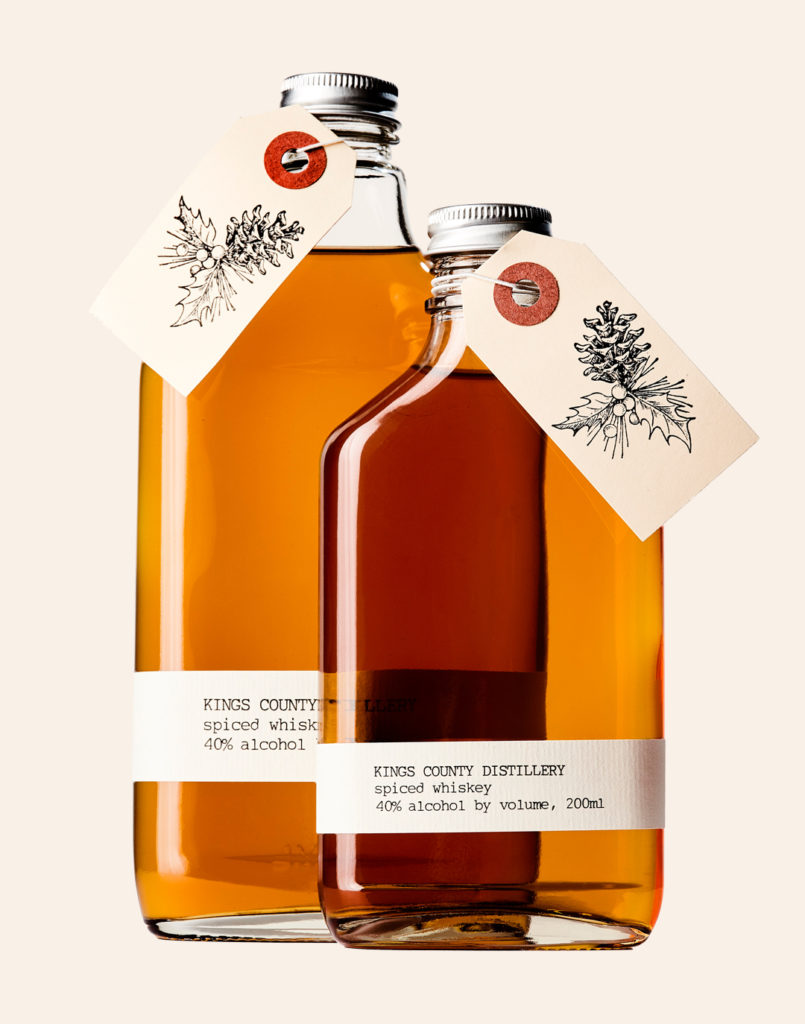 Our fall/winter seasonal release is an infusion of baking spices associated with mulled cider, hot toddies, and holidays with family and friends. Using cinnamon, cardamom, nutmeg, allspice, black peppercorns, clove, and star anise, this whiskey is a bold but balanced answer to some of the cinnamon-flavored offerings from bigger distilleries that aim for a broader audience. Perfect for cocktails that like a spicy cinnamon kick (we suggest egg nog), this whiskey is designed for crisp, cool weather. 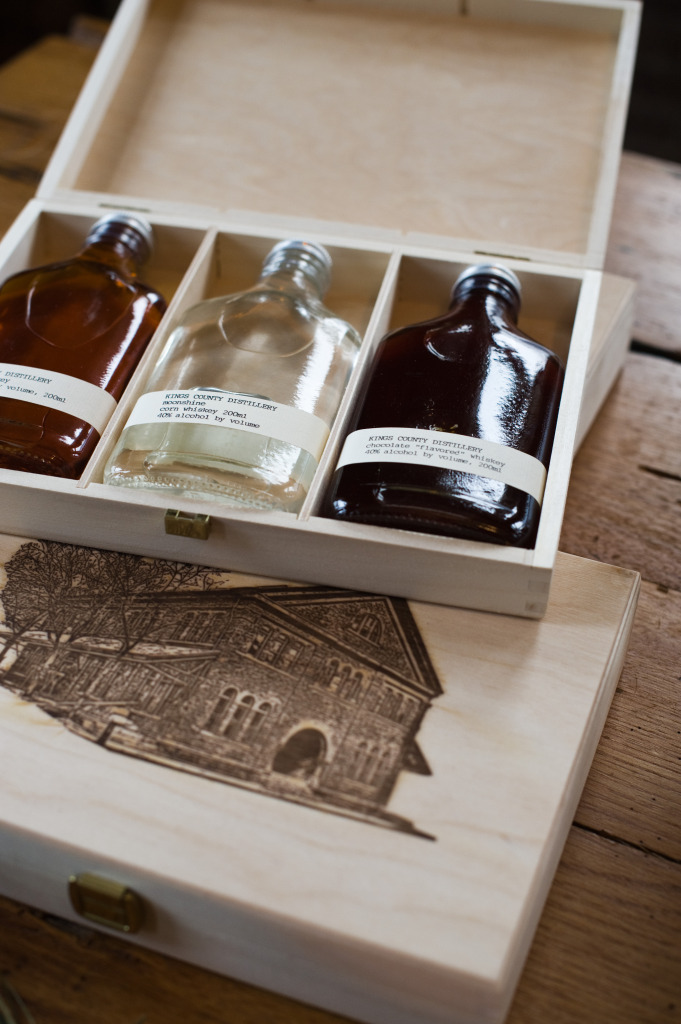 These gift sets offer all three of our main whiskies in 200ml bottles, packaged in a handsome wooden box made just for us down the street in Brooklyn.  The box has a burned-in image of the paymaster building from the 1900s. 5-bottle sets are also available from select retailers with the moonshine, bourbon, chocolate, peated bourbon and limited edition seasonal whiskeys.

Due to coronavirus-related restrictions, we are operating on a limited basis. While we are not open to the public, we have converted our production to hand sanitizer and are offering our whiskey for delivery & pickup for NY State as well as virtual tasting experiences.